Published 2 years ago Dr Munye2y ago 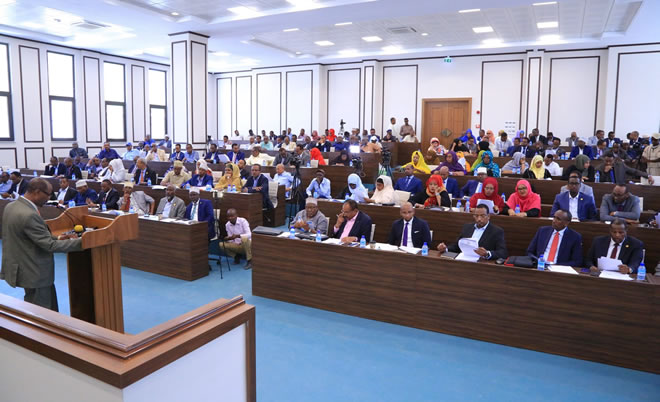 In recent weeks, voices about plan to prolong the term of the Federal House of the People and, possibly, that of the incumbent Head of State became louder. Unofficial media reports suggest that a number of Lawmakers would be pondering over a bill soon to be submitted to the Federal House of the People to that end. The speculation about extension of parliamentary mandate has gained much wider currency following recent announcement made by the Chairperson of the National Independent Electoral Commission (NIEC) that upcoming parliamentary elections based on one-person-one vote system of voting will not take place on time, as scheduled. The parliamentary term of office is slated to end in November 2020.

The much talked issue about extension of the term of the Federal House of the People reminds us a similar event which emerged in May1958 when a motion sponsored by a group of MPs calling for the prolongation of the term of office of the first legislature for 18 months (June 1958-December 1959) was submitted to the Legislative Assembly. The mandate of the Legislative Assembly, elected in 1956, was slated to end in June 1958. Elections for the second legislature (1959-1964) were scheduled for March 1959.

The reasons for calling the extension were stated in the preamble of the motion as follows: a registration of the population was considered necessary in order to guarantee the accuracy of the popular consultation by direct suffrage; the holding of election in 1959 would necessarily imply a second electoral consultation in 1960, when the trusteeship period was due to end, thus placing an undue burden on the Territory’s finance; there was a need to approve a comprehensive law on citizenship, defining persons who might vote or be elected. (UN Doc.T/1444, Report of the UN Advisory Council for the Trust Territory of Somalia, April 14, 1959)

The motion calling for the extension came up unexpectedly at a time when the Legislative Assembly had in its agenda the discussion of a draft law on the forthcoming 1959 general elections. The motion sponsored by a cross-party group of 50 MPs: 31 from the Lega, 12 from the HDM Party, and 7 from the Mixed Group, was approved by 51 votes, out of 60 present, 2 against and 7 abstentions inviting the government to prolong the term of office and activity of the Assembly, originally expected to end on 30 June 1958, up to December 31, 1959.

The two “nays” were from Aden Abdulla and Sheikh Hassan Kalif Sheikh Omar, Deputy of Bardera. (Aden Abdulla Diary, May 26, 1958) The motion drew immediate rebuke from President of the Legislative Assembly, Hon. Aden Abdulla, the Administering Authority and the Consultative Council of the United Nations.

Aden Abdulla, a straight-talking man of principle, dubbed the motion “a move dictated by personal selfishness, sponsored by people whose desire was to prolong their position as MPs”. (Diary, May 26, 1958) He believed that the lack of accurate population census was not an impediment factor to general elections being held in Somalia, citing as an example India, Sudan and Nigeria as countries where elections had taken place despite absence of population census.

The President of the Legislative Assembly, mindful of the failures experienced in the past, was conscious of the extent of the problem related to the nomadic population census.

The government was thus requested to withdraw the election bill and resubmit it to the Legislative Assembly by the end of 1959, after the population census had been completed and the citizenship law passed. The Prime Minister, in a letter to the Acting Administrator, Mr. Piero Franca, made clear that his government was not ready to present a law prolonging the term of office of the Legislative Assembly.

“Without ignoring the decision of the Assembly”, he wrote, “it is a fact that the government will not present a bill relative to the prolongation of the Legislative Assembly up to 31 December, 1959, unless such a prolongation meets Your Excellency’s favour.” (Letter No 027/Ris. of May 28, 1958, from Abdullahi Issa to Piero Franca).

However, as a result of a subsequent compromise between the government and Parliament, the motion was later superseded by a new bill suggesting the extension of the Assembly for six months ending on December 31, 1958. (Legge n° 24, Agosto 1958)

If we establish a comparison between the Legislatures of the 1960s with the one of 2020, in terms of efficiency integrity and performance, the following picture emerges:

In 1958, the Members of the Parliament enjoyed the confidence of the public who elected them through open competition between political parties. Those days the Parliament boasted the membership of distinguished figures of the likes of Aden Abdulla and his colleagues who took the country to independence and ran it in full observance of the Constitution and its principles. Today the selection, (not the election) of the MPs comes through an intricate network of corruption and fraud.

Today, in general terms, the Federal House of the People is packed with elements, of both genders, having little or no familiarity with the constitutional evolution the country had gone through since the Trusteeship period. The division of power between the constitutional organs of the State remains a purely theoretical notion written in a piece of paper. As a result to this anomalous situation, political analysts and constitutional experts alike find it difficult to reefer to Somalia as a real parliamentary Republic.

The current Legislators have lost the public confidence amid series of unorthodox decisions they have reached, the latest of which was the unconventional manner they ousted the Prime Minister on July 25, 2020. Many of them have the lowest support for another term because of their failure to exercise any of the four core duties typically associated with the role of a MP: legislation, executive oversight, constituency representation, and constituency service. Hence, the desperate attempt to prolong the term of the House of the People beyond its expiry date.